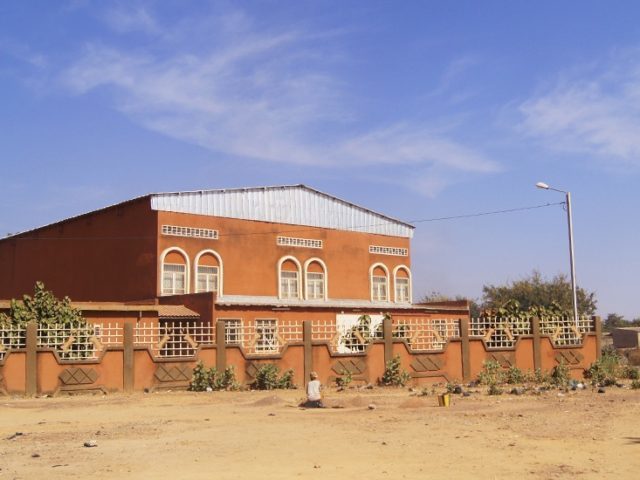 It is a temple of dance in the heart of Ouagadougou.
The Choreographic Center ‘La Termitière’, born almost 15 years ago, pursues its ambition to develop contemporary dance on the continent. This year the CDC announces the construction of a new studio and the rehabilitation of the outdoor theater.

Burkina Faso has long been an important cultural hub of Africa: film festival (FESPACO), crafts salon (SIAO), theater festival (Les Récréatrales), electronic music festival (Africa Bass Culture) …
In 1986, President Thomas Sankara, committed to highlighting the culture of his country, built a popular outdoor theater in the heart of the Samandin district in the capital Ouagadougou. 20 years later, internationally renowned choreographers Salia Sanou and Seydou Boro brought the site back to life by making it their home with CDC La Termitière.

The two dancers and choreographers met in the course of their respective artistic journeys. In 1996 they founded together the company Salia Nï Seydou. Ten years later they pursue their desire to develop contemporary dance in Burkina Faso by building a choreographic center, with the support of public authorities.
If dance is very present socially, so far it didn’t have a dedicated place in the region. In front of this reality, they wish to bring a valuable tool to African artists. Following workshops and projects on the territory they opened La Termitière, a space for creation, performance, training, exchange, a space that ‘swarms’ with ideas, like a termite mound.

The space has since grown, hosting the festival Dialogues de Corps, professional trainings such as Je danse comme je suis and Yeelen Don, the workshop Regards Partagés. It also organizes several projects off-site, including Refugees On The Move. The center is involved locally and internationally, linking artistic and social concerns.
Companies come for creative residencies, and artists can be accommodated on site. Workshops such as Engagement Féminin take place every year. And finally, touring productions make stopovers there.
The place is so prolific that it would be almost cramped…

It is therefore very good news that comes in this complicated period that is 2020: the CDC La Termitière will have a new dance studio!
On July 28th, the first stone of a second studio was laid in the presence of the Minister of Culture, Arts and Tourism, Mr. Sango Abdoul Karim.
A needed space that will enable the host of creative artists and students at the same time.

But that’s not all! Another historical project is underway: the rehabilitation of the popular outdoor theater Desiré Bonogo.

Last February, on the occasion of the 5th edition of the INSPIRELI AWARDS, a competition for architectural ideas ‘The Popular Theater Idea’ was launched to revitalize the site.
252 students from architecture schools and universities from 43 countries participated with 146 projects. Emphasis was placed on the innovative dimension, consideration of local materials and respect for the environment. 3 finalists will be chosen. In this month of September 2020, the proposals will be exhibited at the CDC and open to public voting until October 10, inviting local populations to participate in the project with which they will co-exist.

A market study will then be conducted in order to seek partners for the realization of this beautiful project.

There are many challenges for the cultural space: the development and coordination of activities, the maintenance of buildings and gardens, the funding…
And the constant struggle to improve its environment. For if the initiative of the choreographic center is acclaimed by all, the red carpet that is rolled out yet to the place: the access road remains unpaved and the area unsanitary. In spite of the request to the authorities by the inhabitants of Samandin and the members of La Termitière, a dump is still set up in the vicinity and the inaction of the city hall is testing the patience of an entire neighborhood.

Despite the pitfalls, this cultural mecca continues to stimulate children, to offer alternatives to young people, to welcome artists and audiences of different generations and backgrounds.

The CDC La Termitière is a unique place in the region, a temple of dance in Africa and a green lung in the heart of a popular neighborhood in the capital of the ‘Land of Upright Men’.

We will keep an eye on its news and are looking forward to visiting it again!