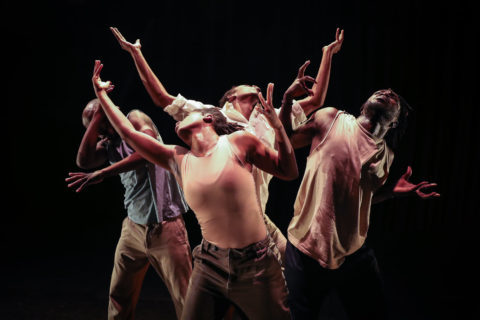 Power, softness, rage, poetry. Sometimes like raging waves against the pier, sometimes in a soothing movement like the low tide, the dancers of La Mer Noire inundated the stage of the Jean Rouch Cultural Center last Friday.

Niamey, 20:00. The heat is still stifling. The sun has been beating down all day on the mineral stage of the outdoor theater and the walls are sweating the accumulated degrees. A pulse in the background, 4 bodies moving on the stage. After Senegal and Togo, the Senegalese dance company La Mer Noire makes a stopover in Niger to present its new creation on the occasion of an African tour.

Raw, unpredictable, hypnotizing like the ocean, the bodies confront each other, support each other, intertwine, battle each other, breathe, and gasp for breath.

The dancers come from house, breakdance or Krump, but technique is not the point here. 4 beings reveal themselves on stage. Loaded with their lives, their emotions, their present state, the past day, it is with sincerity that Dexter Belleka, Khoudia Toure, Alioune Sow and Cortex Tsengou Digna spatter us with their powerful, hybrid and true gestures. From a being alone against all to a pack ready to fight; from the intimate to the riot; from complicity to rivalry. Exploring the relationships of force and power, the group metamorphoses from chaos to harmony, sometimes all-powerful, sometimes helpless. But it is cohesion and unity that prevail in this realm where everyone struggles with their dreams and demons, where everyone moves forward together, in search of freedom, in search of a new order.

Julien Villa’s soundtrack supports the dancers, sometimes guides them, sometimes follows them… and like a meandering river, it slips between the rows and envelops us.

If the dancers finish breathless in a moment of hype and fly, they also leave us short of breath, subjugated by the strength of the stomps of an ecstatic Dexter and the generosity of a united group that gives everything on stage.

Also discover the film The Call of Dance , with the dancers of La Mer Noire.